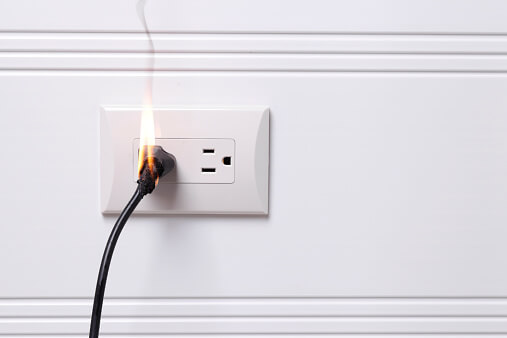 Why You Need Power Protection for Home Electronics

In this era where technology is quite the dominant factor in our lives, there isn’t anything you can do without the help of electronic appliances. You have microwaves and ovens to heat up your food, laundry machines to wash your clothes, your smartphones to video chat with friends and family across the globe.

There is also the addition of smart home devices now widely available, making normal mundane things even more convenient – probably to the point that we’ll all become lazy pretty soon. You can lock/unlock your doors with the press of a button; likewise with smart cameras you can now communicate with those at the other end of the camera, and answer your door with video doorbell even while you’re seated at your office.

Home electronics, smart or not, cost a lot – well most of them. There comes the natural need to replace them every few years once an appliance or electronic has worn out, but what happens when something stops working abruptly? That’s usually the result of power surges. And it is because of power surges that home power protection is absolutely necessary.

How Do Power Surges Damage Electronics

A power surge, also sometimes referred to as an electrical surge, can be described as a sudden spike in the voltage that usually just lasts for a few seconds. This excessive voltage that passes into the electronic or appliances generates heat which can be damaging to the electrical components and circuits within the devices. They usually go undetected unless there’s a massive level of voltage influx which would count as a bigger surge and almost immediately damage the device; otherwise power surges tend to slowly decrease the lifespan of an electronic appliance or device till they eventually stop working out of the blue.

To further understand how power surges are damaging, you must know what exactly triggers them. There are numerous factors that can trigger a surge but here are some common ones:

Lightning strikes carry around 30 million volts, whereas the average household capacity is 120 volts. You can only imagine how even if a small portion of a lightning strike makes it into a home, how damaging it can be.

There is an easy way to spot faulty wiring if it’s within the walls: a buzzing sound from the power outlet, or burn marks around and sometimes even an odor coming from it.

Overcrowded power outlets or power strips can trigger a power surge. Similarly switching on heavy appliances like air conditioners, or washing machines can result in an immediate influx of electricity when powered on.

Usually when electric companies turn the power back on after a blackout or a mass outage, it releases heavy electrical voltage into the grid system altogether, so it’s not unusual to see a sudden jump in the voltage when the power is restored.

Any sort of damage to electronic appliances and devices requires immediate repairment. Repairs and, if it comes to it, replacement of these appliances and devices can be expensive especially when they need to be repaired or replaced almost immediately. Things like refrigerators, or air conditioners are what we are referring to here – the important stuff basically, because appliances like TV’s or even toasters for that matter can wait.

Here’s how you can provide protection to the electronics in your home.

A lot of electrical companies offer surge coverage plans that essentially serve as an insurance you can say, for certain or almost all electrical appliances and devices in your home. FirstEnergy provides a surge coverage plan at rates as cheap as $8.99 monthly. They cover costs of up to $6000 in annual protection with no deductibles like they have with insurance in general.

Surge Coverage Plans cover anything from smart devices to regular appliances and electronics such as televisions, dryers, ovens, refrigerators, air conditioners, and even other like gaming consoles and laptops.

Use a Surge Protector

Surge protectors are actual devices that you can use to prevent your electronics and appliances from getting damaged. They resemble power cords and are even available in the form of multi-plugs, except they are not anything like the ordinary ones. These come with built in, what you can call circuit breakers or a sort of technology that grounds the extra voltage if a power surge occurs, instead of letting it pass through to your device.

There are some things about surge protectors you should know though. They are comparatively pricier than regular power cords and multi-plugs because of their functionality. And when it comes to the lifespan of these devices, they last up until they’ve run their course – meaning a surge protector can endure only so many power surges before it wears out and you need a new one.

For more information on surge coverage plans, head to over to www.firstenergyhome.com and check out their available plans.