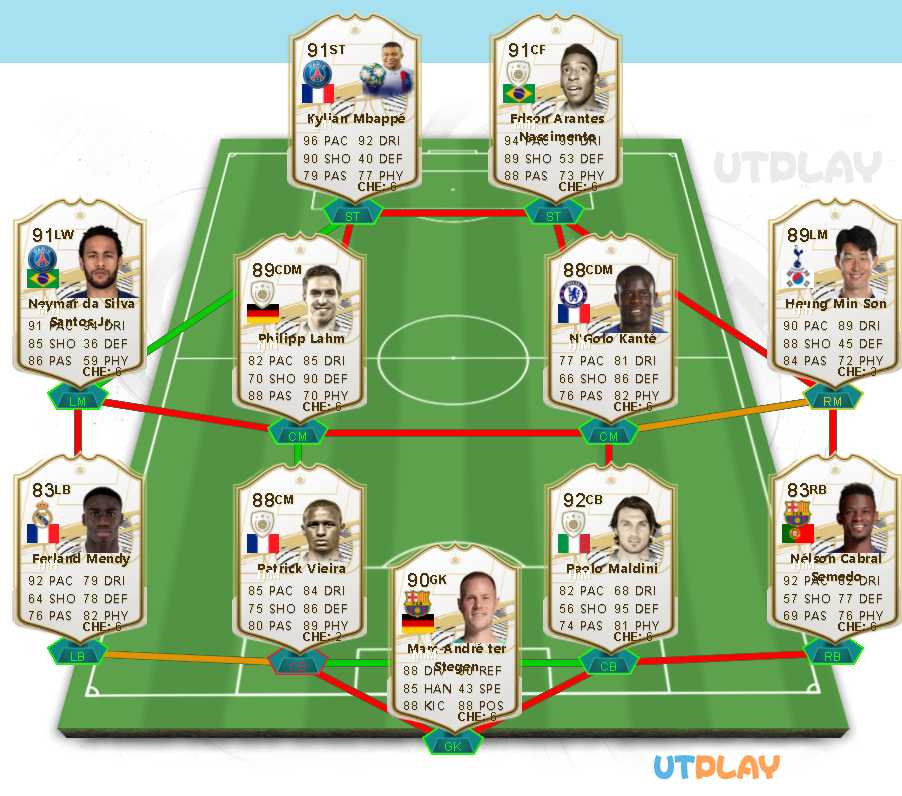 In FIFA 21 Ultimate Team, if you want to score more goals or win more competitions, choosing the best formations and build a perfect FUT 21 squad is very essential which can have a huge impact on the outcome of a match. There are plenty of squads in FIFA 21 Ultimate Team. Today, we will be putting together an overpowered team Hybrid, it features some top-rated players such as Ter Stegen, Neymar JR, Mbappe, and more. We’ll make an analysis of this team and detail all the player’s skills and in-game stats.

Once we’ve put all the players in the team, it works very nicely. then I’ll introduce you to these players’ skills.

Ter Stegen: He is a goalkeeper and it’s a great starting 11 right-back position. With 90 overall ratings. So a really solid rating. You can also use him in FIFA 21 SBC’s. This La Liga Player has some incredible stats, 88 diving, 90 reflexes, 85 handlings, 88 kickings, which means he’s incredibly usable. And he’s not that expensive, you can pick him up for around sort of 55K FIFA coins.

Maldini: He is a brilliant player. He’s got 82 paces, is on that with absolute supreme pace. And he also has good stats, he’s got good defending, his tackle is pretty neat and tidy for a CB, and his physicality. He’s alternative and weirdly enough in FIFA 21. Price: 69K FIFA coins.

Vieira: He’s 6’4’’, medium/high work rates are crazy, 85 pace is crazy, 86 defending is unbelievable. He is a very valuable player to the team. He makes tons of inceptions, great tackling, great strength in the game. He’s got a great range of passing 85, so he’s able to get out of tight situations. Price: 74-98K FUT 21 coins.

Neymar JR: He’s the Brazilian beast, he’s the only cool left back in the game. He is a really solid player. Once he won the ball, he was able to use it quite wisely, as he does have 86 passing and 94 dribbling which is always quite decent on a defender. Price: 798K.

Mbappe: He’s incredibly quick, very fast with 96 paces, he’s got great balance, he moves with absolute ease very quickly, and he also can do it with the ball, because he has 92 dribbling which is very rare for a faster. He shoots very well with 90 shooting stats. This card is gorgeous. Price: 72.6K.

Lahm: He is not the quickest player in the world but he is 89 rated, a really nice high rating on a card with some incredible stats. His shooting obviously does let him down a little bit, but where he really excels is with his dribbling and passing 90 defending means that he will make some incredible interceptions.

Pele: This is a decent card about 68K, but definitely not better than those players. He does have really nice pace of 94 , 89 shooting, 93 dribbling, 5-star skill moves and 4-star weak foot. It’s not the best, but it can definitely last you all game. The only issue of this card is the 53 defending, but as a striker, that’s not a big issue. So overall, he’s a really decent player, really good on the ball. You can just go ahead and try him.

Kane: The CDM of the team with 88 ratings. This is a very sweaty player with 3-star weak foot, 81 dribblings, 86 defending, not the best finishing but he can get into a lot of positions. It costs about 350K FIFA 21 coins.

Son: This is Son’s POTM Card that costs around 770K FUT Coins. He’s got 4-star skill moves, 5-weak foot, and high/high work rates. He’s very fast with 90 paces, 88 speed and 91 sprint speed is amazing. He’s really great on the ball, he’s got 91 reactions, 90 dribblings, and excellent 90 composure. The shooting stats are also amazing, 90 positionings, 92 long shots, and 90 shot power. The only downgrade of this card is the defending stats, but that’s not a big issue.