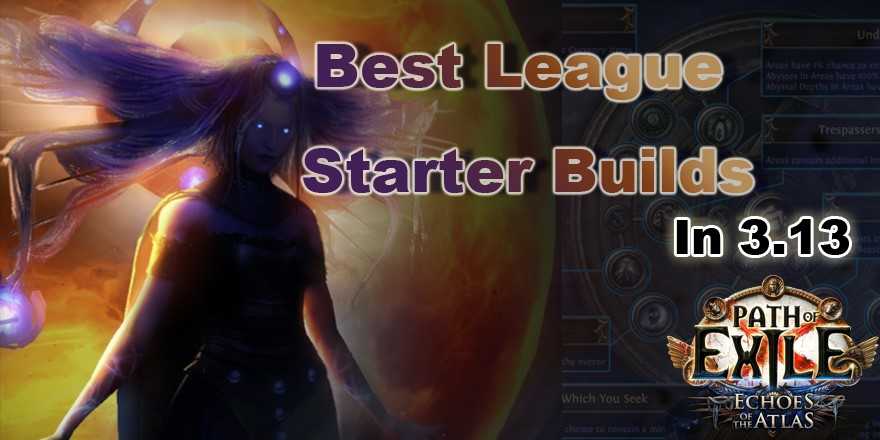 Now as we all know that a new League, endgame content to pursue and farm, and all brand new challenges coming to the latest expansion named Path of Exile: Echoes of the Atlas. To some extent, this brings a chance for both experienced players and beginners to start fresh and face all-new dangers, however, it comes with the usual balancing costs that you would expect from a major update. In this post, we will go over the best League starter builds in this latest expansion. You might find it would be much easier for you to get Path of Exile rewards (more than just PoE currency) after reading this post.

This latest expansion, Path of Exile: Echoes Of The Atlas, is worth considering that this will be concentrating not only on mapping but also on bosses, therefore, it’s a matter of balancing the speed required to complete maps several times, meanwhile, in this league, you also need to focus on damage and defense to sustain yourself during waves of boss fights that await from the Maven’s challenge.

Before we get started on some of the selections that might already prove worth pursuing depending on your playstyle, please keep in mind that we’ll be doing overviews of each Path of Exile build, whereas some specific passive abilities will be shown by using Path of Building, which is a community-based build planner that also offers recommendations on gemstones and skills.

I have to admit that this is a really fun build because it basically could create a vortex around the character that deals both damage and poison to your enemies, it does require you to literally get close enough to the enemies because the surrounding area isn’t incredibly expansive, and that will do no harm to the enemies, however, once you follow the step, basically, you can move on to the next mob group easily while seeing all of them getting killed in your path. And yep, totally, hitting multiple enemies at once also indicates you’ll be stacking up the massive poison as well.

As you can see that in Path of Exile 3.13: Echoes Of The Atlas, here changes are probably the most prevalent ones of the builds we’re right now examining in this guide. The Assassin has received several nerfs that totally go against its nature: now it has reduced damage, damage resistance, and movement speed. The percentages aren’t that high to totally turn this build around, however, we are yet to see the results of this until the expansion is eventually out.

If you are a Path of Exile veteran, then you should aware that this build has been one of the go-to builds for the last few Leagues amongst Path of Exile players, since it offers an entertaining and streamlined method to stack bleed on enemies without sacrificing damage nor speed. Moreover, attacks will affect a lot of enemies at once, leading to bleed explosions. To be honest, it works even better with the Puncture skill, which does need more precision than some regular attacks but, on the bright side, it’s totally worth the aiming effort.

A senior player named mbXtreme advised that Essence Drain (usually referred to as ED) is a different option. This skill fires a projectile that hits for a small amount of chaos damage and applies heavy chaos damage over time effect. The strange thing is that it also regenerates a portion of that damage over time flows as life for your own character, just in case you also need to balance your defense.

How to comment on this build? This build might seem a little ridiculous in action, but do bear with us. It mainly focuses on ice novas that are cast repeatedly on frostbolt projectiles, an action that occurs automatically without continued casting as the frostbolt travels through the surrounding area. However, continuous casting is instead used to stack up these novas and create a chain reaction.

The Ice Nova Hierophant build does require some particular flasks and some buffs to maximize damage, however, you can still expect a hybrid between mana, life, and energy shield pool for your own character’s survival, decent block chance, immunity to elemental ailments, and some other advantages.

And equipment relies on rares and several affordable unique items, either a rare scepter, staff, or wand should be enough for early mapping. As for Hierophant’s changes, Life Leech right now is not as approachable as before, but Arcane Surge is now much easier to acquire, as well as having an increased effect.

In this build, it requires a lot of items to fully activate. And for some players might not store all of those asked items, in order to solve that, players have to trade with other players, and that asks players have massive Path of Exile Currency or some of the same value items, still want to use this build as a starter in PoE 3.13. Maybe it’s time for you to buy PoE currency online.

Last but not least, with this build, arrows rain down, causing Chaos damage over time and dealing explosions that overlap with one another. Mainly thanks to the use of spore pods, this creates stacked damage on single targets. This combination has an area of effect, however, there are several skills that help to slow enemies, and finally making targeting much easier in return. And Esoro also suggests a Mirage Archer Support skill (this skill can summon a ghostly character once the player hits an enemy with the supported skill) therefore, you can escape from damage safely without having to pause the attack for a couple of seconds.

As you can see this build is perfect for newcomers because there’s no need to fiddle with special flasks (used both health and mana)  or special buffs in order to get to the desired damage per second, and you also could expect to have a solid defense. Bear in mind that, compared to previous Leagues, the Trickster class has been nerfed in a lot of traits: spell dodge chance, damage output, and movement speed were all lowered a little bit, however, the build should still be viable since the changes weren’t so drastic. A specialized bow for example the Torment Breeze Thicket Bow is highly recommended.

Well, that’s just some of the best league starter builds in Path of Exile: Echoes Of The Atlas, and if you find some of the builds that are much easier for Path of Exile newcomers and experienced gamers to play, you can leave your comment below. I am pretty that will occur once the Path of Exile 3.13 is officially launched.