Hello to all the new fans who got Animal Crossing New Horizons over the holidays, we want to take this opportunity to have our community welcome all of your new fans to the game who just barely started off on their deserted island getaway. And we thought this would be a great time to give you a bunch of beginner tips and stuff we wish we would have known when we first start off the game. 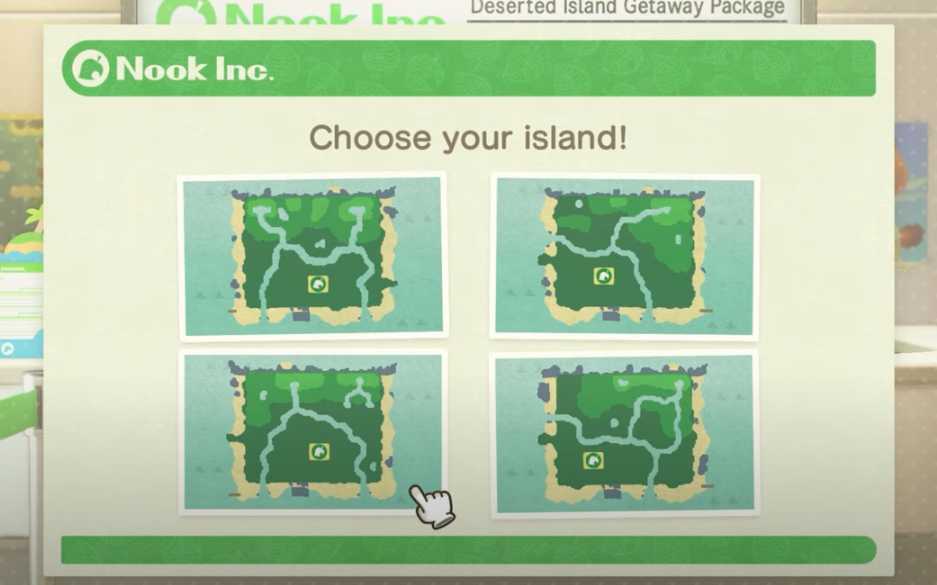 When you first start the game and talk to Timmy & Tommy at the counter, you’re offered a bunch of different map layouts, and it can be a little overwhelming because you don’t really know what you want my town to look like.

There’s really only a couple of factors that actually matter when you’re selecting your island, because later in the game as you’ve seen in probable trailers and stuff you get options to terraform where you can change the layout of your town, change the rivers and stuff, change the variation in the terrain. So there’s a lot in your town that you can customize. However, there’s a selection of three things that can never be moved: The first is the location of your dodo airlines, where you’re playing, and where your hub for multiplayer is your resident services which will be marked with the big leaf icon. This is kind of like your town hall area will be like the center hub square of your island. The last thing is the mouths to your rivers the connections points from your river going into the ocean those cannot be moved you, of course, can delete the river in front of it but there will always be an entrance going out from your river to your ocean at those locations.

Get your daily diys, there are a ton of DIYs across the horizons offering a  wide variety of different customization, and other furniture stuff you can make. Especially when you’re first starting off, it’s really important to make sure you continue to collect your daily diys so you can grow and expand your catalog. There will be a message in a bottle on the beach that you can collect once per day, where you can get a diy. In addition to that, you’ll often every once in a while have a villager crafting in their house, so it’s always worth checking in each of your villager’s homes to see if you have a villager crafting. Building off of that,  when you have a friend visit your island or if you’re visiting another friend’s island, it’s nearly guaranteed that one of the villagers in the town, will be crafting a new DIY, so it’s always worth checking that out when playing multiplayer. Beyond that, there are the floating balloons that can give a wide variety of rewards, whether it be crafting materials, new ACNH furniture items, but also the rare chance of new diys. So it’s always good to keep an eye out for balloons in the sky and shoot them down just in case you can get yourself a new DIY

The harvesting rock trick early in the game it’s required that you get a bunch of iron ore, so you can actually build yourself Nooks Cranny. In order to get stone as well as iron ore, you’ll collect that material from rocks, the way to do that is of course to hit it either with your shovel or an axe, and as you do that your little villager will bounce back and materials will come from it, however, there’s a specific time limit on how many times you can hit the rock in a row since your first hit. So that’s why it’s important to be as close as possible to the rock and not fall too far away,  otherwise, you’ll miss out on potentially getting more materials from the rock than you could, otherwise, your best bet is to make sure all these tiles around the rock in a three by three area are all clear and open therefore you know all the materials can actually fall on the ground. 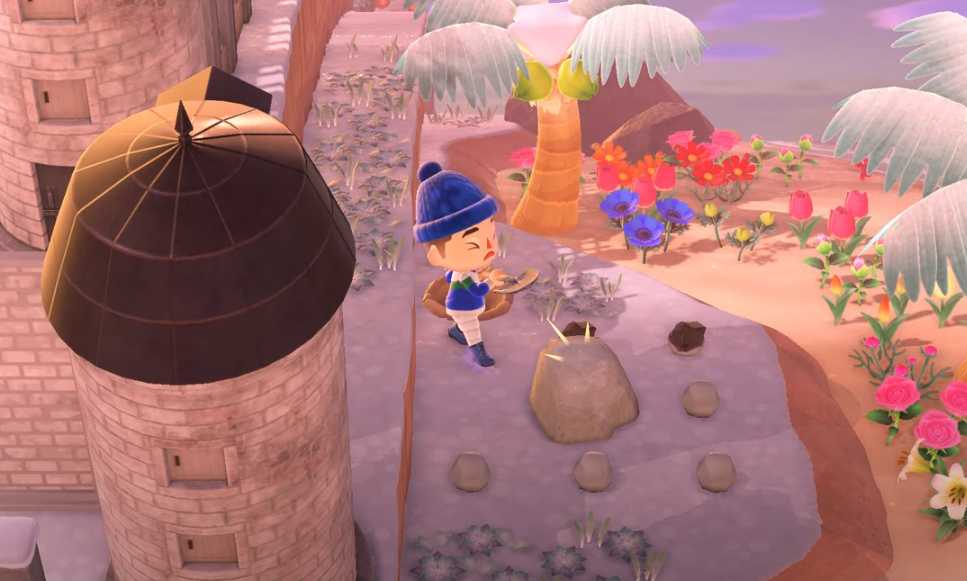 Then what you can do is on one of the corners of the rock, you’ll dig two holes whether up or down or left or right of you, essentially creating a little corner that your villager can’t pass through. As you hit the rock while sitting in this corner, it’ll actually keep your player in place therefore you won’t like to fall away or have to run back to the rock. It’ll guarantee that you make sure you get all eight materials from a single rock.

How to unlock the ladder, terraforming, and paths? These are a lot of questions that people have when they first start off the game. There’s a lot of stuff that you don’t have yet and you’re waiting to unlock. Honestly, our best advice to you just keeps talking to Tom Nook each day, he’ll tell you what you need to do to continue progress in the game. Eventually, as you continue along in the progress in the storyline of talking with Timmy, you’ll unlock all of these things. You will quite quickly get a ladder and as far as terraforming and pass it does happen at the end of Tom Nook’s campaign of stuff but without time-traveling, you’ll get it in roughly two weeks.

There’s no cheat or easy way to get it, you just gotta play through the game keep talking to Tom Nook, and each day he’ll keep you on track to make sure you’re doing everything correctly. Just keep asking him what should I do, he’s your best resource to keep making progress to make sure you unlock these other features later on.

We are not going to go over a bunch of different Animal Crossing bells making strategies because we actually already did in other articles explaining different methods to make bells but more than just that it also gives a lot of examples of different kind of ways to make bells as you continue to progress through the game and unlock more stuff. It explains the shiny money spot it, explains the money rock, and also gives a great breakdown on how to best sell your turnips. 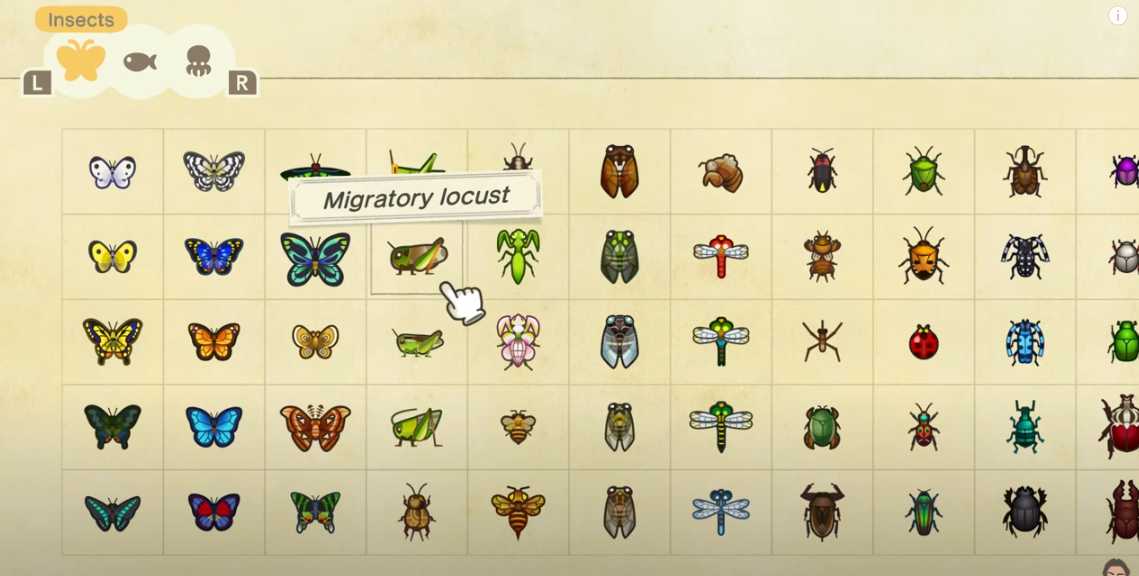 As you collect your bugs fish and fossils, you have the optional choice, of course, to complete your museum by donating one of every single critter in the game to blathers to be displayed in their exhibits. There are two really useful methods of keeping track of which bugs and fish you’ve already donated. For one thing the first of every bug and fish you collect there will be a unique dialogue box before it gets into talking to its little pun, it’ll be like yes and then it’ll go into another dial box saying I caught a lobster isn’t that a collab stir.

Every single other one of that same species you collect afterward will no longer have that big yes dialog box so it’s a great way to tell right off the bat of which creatures you caught are brand new, so you can think oh okay this is a new bug or fish I should donate this one right away. Another tip is inside your ACNH critter itself, you can go through the list of a bunch of different bugs and fish, there will be a little owl icon next to the name of the bugger fish indicating whether you’ve actually donated it to the museum or not. So it’s a really great way to keep track of which bugs and fish you’ve donated to the museum already, then you can continue to make progress along there.

When you start the game, the biggest scorpions as well as the tarantulas on your island, creep around and they can sting the player make you get sent back to your home but don’t need to be afraid they’re actually not too hard to catch once you know the trick. When you see a tarantula, all you’ll do is you pull out your net get about a good distance away from it, then hold a button your villager will then creep along holding the net getting ready to swing, once the tarantula notices you’re there it’ll turn to face you and will get up on its hind legs warning you off. Essentially what you need to do is every time it gets up on its hind legs you need to stop moving it’s kind of like a red light green light where every time he moves back down, you creep forward once he gets back on his hind leg you wait for a second right for him to screech at you, and then you can continue to make your way once he goes back down. The tarantula or scorpion will never charge at you unless you’re moving while it’s up on a time leg, so you kind of just give it a second walk and you can easily get to the correct position you’re gonna need to catch that elusive tarantula.

How to catch a really fast diving fish? There’s a wide variety of different creatures you can catch using a diving suit, some that are stationary doesn’t move at all, some that swim around. But the ones that are really rare and worth a lot of bells are the really fast ones that are super hard to catch. You could just kind of chase it all the way to one of the corners in the ocean try to corner it in its spot, that takes a lot of work. The best technique to be catching these really fast diving fish is instead of mashing a to swim just push forward on the control stick and tread water to make your way towards the bubbles of where that fish is. Then once you’re right on top of the creature that’s when you dive down, so then you’ll dive down right on top of it and should be able to catch it right away. Otherwise, these really fast diving suit fish are really difficult to capture, so using this trick makes it a lot easier.